My primary source of news these days is my Twitter feed. I joined the site later than most, and avoided the temptation to follow my friends and family so I could keep track of what they are having for dinner. I mostly follow news sources, which means Twitter is like my own personal news feed. (Click the image below to follow me.) 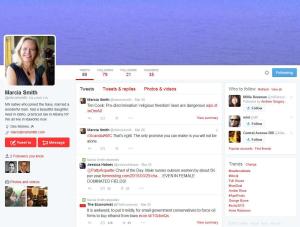 I follow and click through to lots of articles on Vox and Politico. Two recent articles on these sites deal with an issue I discussed in a recent article for AHLA Connections: how should the changing U.S. demographics change how health care companies operate? The main point of my article was health care providers need to embrace cultural competence to be competitive in the future.  If we are going to design our health care systems to meet the needs of our patients, we need to be able to communicate with our patients and understand how their culture affects their health care needs.

Ezra Klein from Vox discusses how the changing U.S. demographics are changing the nation’s media business. The old media was dominated by white men, and the stories they told were those of interest to white men. The new media is more diverse and the stories that go viral on social media sites are those that touch on a reader’s core identity, including her race, ethnicity and sexual orientation:

The internet has set off an explosion of media outlets, so more kinds of stories are being tried. There’s a vast increase in reader data, so it’s clearer which stories get read. And audiences now have the power to send stories viral, so there’s more reward to writing about issues that affect people who may not already be part of your core audience. There are dark sides to the chase for viral traffic, of course, but on the whole, I think this is a pretty positive development in American journalism: it’s helping us realize we were systematically giving too little attention to stories that weren’t of interest to the kinds of people who dominated newsrooms.

Writing for Politico, Doug Sosnick argues the present day is a “hinge moment” due to the changing U.S. demographics and the 2016 presidential election will be a bridge from the past elections, when a majority of voters were white, to future elections when the full effects of the new demographics will emerge as a factor:

As we begin to settle in to a post-industrial, interconnected digital world in an emergent multi-ethnic society, the 2016 presidential campaign is likely to close out a long era in American politics—a shift that is going to change which voters matter and which states matter.

While the 2016 presidential election is likely to reflect the last remnants of this bygone era, the candidate running for president in 2016 who best understands how the country is changing and runs a campaign based on the America of the future rather than the America of the past is most likely to be our 45th president.

There are probably numerous other articles that make similar points. The smart money is on organizations that compete around the innovations required to adapt to the future U.S. demographics, not its past.